Midway through 2021, we can see the first actual signs of easing up within the ‘pandemic backlash’. But in the vast digital world, the world suddenly beginning to open does not cut back on the momentum some specialized industries continue to seize and thrive in.

Video Game Localization is a worthy example, as, in the current context, leading Video Game Enterprises are rethinking their overall growth strategies and scaling their business and communication ever more vigorously than before with the aid of specialized video game translation and localization services.

According to a whitepaper on the Impact on the video game industry during the COVID-19 pandemic, “the video game industry, when linked to the world of entertainment and influenced by these changes, has increased its demand and has become a domestic activity within a normal day at home, presenting a record in sales and a predominant positioning in the world market” (Revista Athenea en Ciencias de la Ingeniería vol. 1, Nº 1 Septiembre 2020 (pp. 05-13)).

This notable ascending trend in terms of video games sales expansion can be justified by the imposed lockdown restrictions, which made people turn to video games as a form of entertainment and relief, thus incurring a growing demand for game diversity and localization to different locales.

While the global restrictions have “twisted the poles”, with more and more people seeking an immersive experience indoors, through virtual reality and online gaming, inherently, the need for game diversity, as well as properly localized game content to cater to the needs and wants of the population has never been stronger – or culturally sensitive, when failing to do so.

In a recent article entitled “Found in Translation: Evolving Approaches for the Localization of Japanese Video Games”, the author notes that, for example, “Japanese game developers and publishers often base their business decisions on “how imagined players and player communities think about games and what ‘a game’ or even ‘a Japanese game’ should look and play like” (Consalvo 2016, p. 123). The localization of Persona 5 (a role-playing video game developed by Japanese game developer Atlus) received some criticism because of the quality of the translation. Fans lashed out at the unnatural use of English and erroneous game content rendition that blatantly showcased mistranslations, typographical errors, and Japanese honorifics inconsistencies.

2021 is very assertive when it comes to Video Game content localization and the underlying need to strike a “delicate balance between foreignization and domestication, in terms” (Taming the Stranger: Domestication vs Foreignization in Literary Translation, by Zsuzsanna Ajtony).

In another article, Found in Translation: Evolving Approaches for the Localization of Japanese Video Games, Carme Mangiron highlights that, in the context of Foreignization, “preserving most of the original sociocultural content of the game” helps “target players become acquainted with the source culture” (Fernández-Costales 2012; O’Hagan and Mangiron 2013).

Alternatively, Domestication or “mukokuseki” (literally “nationless”) as attributed to the Japanese Gaming market (one, if not, the largest Video Game market contender in Covid 19) points to the process of adapting the source content as required, giving it a local flavour and closeness to the target audience.

A relevant example is a Video Game Localization project following a thorough foreignizing strategy applied to the visuals, storyline, and overall socio-cultural content, while the humour, cultural innuendos and cross-cultural references are domesticated. Mangiron states that Japanese games can often contain a certain degree of sexual innuendo, which, in Europe and North America would be deemed inappropriate for a younger audience.

SEGA’s American branch is a noteworthy example, which usually adapts Japanese game content to the target audience within the Localization process, in order to achieve the level of content appropriation and comfort the target audience desires and expects, within the limits of not completely altering it, thus being viewed as censorship.

Gaming-as-a-service or ‘cloud gaming’ as it is often referred to, refers to a type of online gaming on remote servers through direct streams to a user's device, contrasting with traditional forms of gaming performed locally. Virtual reality (VR) and social streaming has experienced a meteoric rise in recent years, amplified by the Covid-19 pandemic, largely due to lack of physical gatherings or events.

The metaverse refers to a collective virtual space created by the convergence of virtually augmented reality and virtual spaces. Author Apurva Shah defines ‘metaverse’ in his blog article What is the metaverse? (duality.ai) as being accurately modelled to match the real world, with possible ramifications across the virtual and physical divide that generate augmented and mixed reality experiences (AR & XR).

According to Newzoo’s Games Trends to Watch in 2021, these two intertwining concepts are significant trends in the second wave of Covid-19, defining a new dimension for Video Game Content Localization methods due to the higher complexity, from textual content (UIs, captions, subtitles, in-video game text) to audio content (voice-overs, dubbing) and holistic creative and marketing content (graphics, artwork assets, digital advertising, landing pages, social media pages) all the way to labels and policies.

Technical advances and the growing need to consistently adapt to new trends and proclivities dictate a Game Localization Technology surge, more so amplified by the lingering global pandemic that keeps the population constantly connected to the online stream.

A 2020 Nimdzi Research highlights that “9 out of 10 global users ignore a product if it's not in their native language, while currently most organizations building their localization programs know what their core (traditional) markets for localization are. These often include: English; French, Italian, German, Spanish (referred to as FIGS); Portuguese & Brazilian Portuguese, Russian; Chinese, Japanese, Korean (CCJK); and local variants thereof”.

A European rising star in the Video Game Localization top list is Polish, with its growing popularity explained by many video game development companies, studios, and exporters located in Poland. According to a very interesting statistic from Reuters, nearly half of Poland's population consists of avid gamers, and Poland's growing video game industry is expected to further increase to be worth approximately $850 million over the next four years.

The global impact of Covid-19 has altered the classic Video Game Localization approaches and techniques, generating a surge both in terms of demand, as well as execution. Whereas, Video Games were regarding unitarily as an alternative pastime or activity, in the current global discharge, they have become an inherent form of consumption, defined by shifting trends and paradigms. 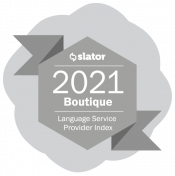